March 5, 2018 – Vancouver, British Columbia – Volcanic Gold Mines Inc. (“Volcanic”) (TSXV: VG) is pleased to report that it has entered into a binding Memorandum of Understanding (the “Agreement”) to acquire up to 100% of JOFEMA Mineral Resources SARL (“JOFEMA”), a private company registered in the Ivory Coast. The assets of JOFEMA under option consist of near-adjacent exploration permits and exploration permit renewals known as La Debo and Soubré (the “Properties”), which together cover an area in excess of 600 sq km, and fall on a major mineralizing shear zone within one of West Africa’s fastest developing gold provinces (Fig 1). JOFEMA holds a direct 100% interest in the Properties.

This acquisition will complement Volcanic’s existing property holdings in the Mandiana district of Guinea, and allow the Company to benefit from a valuable consolidation opportunity in a leading African mining jurisdiction. The Company remains committed to the advancement of its Guinean assets.

JOFEMA has completed over 18,000 m of reverse-circulation and diamond drilling at La Debo, as well as nearly 40,000 m of RAB, air-core and auger drilling at the property. In 2016 an Inferred Mineral Resource1 of 9.5 million tonnes at a grade of 1.3 g/t for 396,000 ounces of gold was defined in two small isolated bodies. This Resource has not been verified by Volcanic and is therefore historic in nature. Over 7,500 surface geochemical samples were collected at La Debo, and on the basis of these data, in combination with limited RAB drilling results, a number of large, consistent targets are observable along strike from the historic Resource, and remain largely untested (Fig 2).

Of particular interest are extensive and continuous soil geochemical anomalies occurring within recognizable and persistent structural zones in proximity to igneous intrusions at La Debo, and Soubré (Fig 3). Importantly, such a combination of circumstances gives rise to gold mineralization of economic proportion elsewhere within the Birimian rocks of the Ivory Coast, a notable example being the nearby Bonikro Mine (Indicated Mineral Resource of 1.3 million ounces at 1.4 g/t Au and Inferred Mineral Resource of 0.77 million ounces at 0.92 g/t Au in 20102). The anomalies at La Debo and La Debo South cover a continuous area of approximately 10 sq km, and have been subject of minimal drill testing, which leave important mineralized structures open laterally and at depth. At La Debo, for example, four consecutive shallow RAB holes at 20 m intervals within the soil anomaly end in >1 g/t Au assays; however, to date no follow-up of this target has occurred, and elsewhere follow-up is minimal. Further extensive gold in soil anomalism is observed at Soubré, where it is similarly juxtaposed to geological structures. Each of these targets provides Volcanic with the opportunity to potentially grow its resource1 base using existing data and low-cost conventional exploration drilling techniques.

The Properties are located in southwestern Ivory Coast, approximately 140 km southwest of the capital, Yamoussoukro, and are accessible via all-weather roads. A power line crosses La Debo in the vicinity of the historic Resource. In 2016 the Fraser Institute ranked the Ivory Coast first in Africa for Investment Attractiveness (https://www.fraserinstitute.org/sites/default/files/survey-of-mining-companies-2016.pdf).

Subject to Volcanic completing satisfactory due diligence and to stock exchange approval, Volcanic will have the exclusive right to acquire up to 100% of the issued shares of JOFEMA, by incurring exploration expenditures (“Expenditures”) on the Properties over a period of three years totaling US$5 million, and making cash and share payments to JOFEMA. Within 90 days of the fulfilment of the Expenditures, Volcanic shall have the right to either:

(a) acquire an initial 65% interest in JOFEMA by paying US$2,000,000 in cash and US$2,000,000 in shares of Volcanic to JOFEMA, and thereafter, continuing to fund further exploration of the Properties. The other shareholders (the “Minority Shareholders”) of JOFEMA may elect to co-fund such exploration pro rata to their own shareholding. Where the Minority Shareholders do not co-fund further exploration, then Volcanic may dilute them to 10% by incurring an additional US$3,750,000 in Expenditures.

Mr. Simon Meadows-Smith is Volcanic’s Qualified Person as defined by National Instrument 43-101, Standards of Disclosure for Mineral Projects,and has approved the disclosure of the scientific and technical information contained in this news release. Mr. Meadows-Smith holds a BSc degree in geology from Nottingham University, England, and has been involved in mineral exploration since 1988, including 20 years of experience working in West Africa. He is a Fellow in good standing of the Institute of Materials, Minerals and Mining in London.

Volcanic brings together a deeply experienced and successful mining, exploration and capital markets team focused on building multi-million ounce gold resources in the underexplored West African countries of Guinea, the Ivory Coast and their neighbouring countries. Through the strategic acquisition of mineral properties with demonstrated potential for hosting gold resources, and by undertaking effective exploration and drill programs, Volcanic looks to become a leading junior gold resource company.

For further information, contact Alex Langer, the Company’s VP Capital Markets, at 604-765-1604, or visit our website at www.volgold.com.

Certain statements contained in this news release constitute forward-looking statements within the meaning of Canadian securities legislation. All statements included herein, other than statements of historical fact, are forward-looking statements and include, without limitation, statements about the Company’s possible acquisition of an interest in the Properties. Often, but not always, these forward looking statements can be identified by the use of words such as “estimate”, “estimates”, “estimated”, “potential”, “open”, “future”, “assumed”, “projected”, “used”, “detailed”, “has been”, “gain”, “upgraded”, “offset”, “limited”, “contained”, “reflecting”, “containing”, “remaining”, “to be”, “periodically”, or statements that events, “could” or “should” occur or be achieved and similar expressions, including negative variations.

Forward-looking statements involve known and unknown risks, uncertainties and other factors which may cause the actual results, performance or achievements of the Company to be materially different from any results, performance or achievements expressed or implied by forward-looking statements. Such uncertainties and factors include, among others, whether the Company will complete the acquisition of an interest in the Properties as planned; changes in general economic conditions and financial markets; the Company or any joint venture partner not having the financial ability to meet its exploration and development goals; risks associated with the results of exploration and development activities, estimation of mineral resources and the geology, grade and continuity of mineral deposits; unanticipated costs and expenses; and such other risks detailed from time to time in the Company’s quarterly and annual filings with securities regulators and available under the Company’s profile on SEDAR at www.sedar.com. Although the Company has attempted to identify important factors that could cause actual actions, events or results to differ materially from those described in forward-looking statements, there may be other factors that cause actions, events or results to differ from those anticipated, estimated or intended. 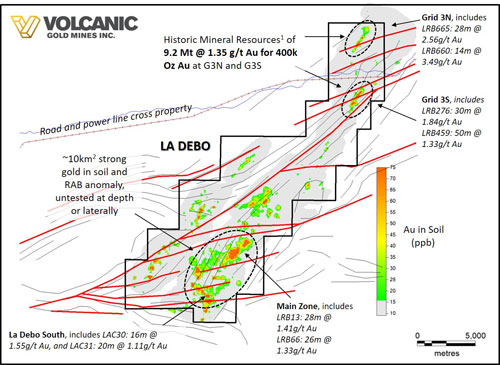 Figure 3: Distribution of Historic Mineral Resources, and principal mineralized targets relative to large scale structures and intrusive igneous features at La Debo and Soubré, noting that such a combination of circumstances gives rise to gold mineralization of economic proportion elsewhere within the Birimian rocks of the Ivory Coast. 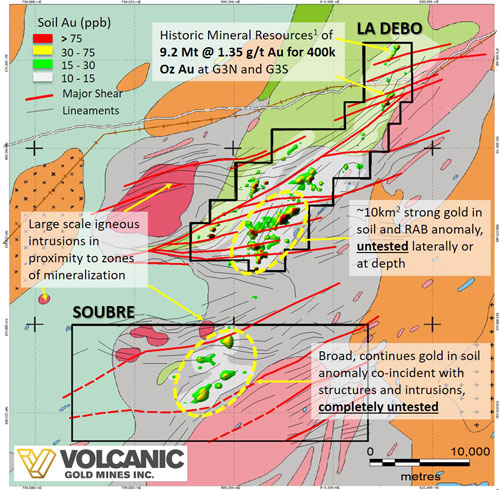